"It must be borne in mind that all this time we have a Sperm Whale's prodigious head hanging to the Pequod's side. But we must let it continue hanging there a while till we can get a chance to attend to it. For the present other matters press, and the best we can do now for the head, is to pray heaven the tackles may hold."

http://jvmnotebook.googlecode.com/svn/trunk/book/articles/example/
Posted by Unknown at 1:01 PM No comments:

Win32 one instance setup for emacs

http://botnode.com/emacs.html - simple setup for running one instance of emacs on windows.

Emacs is a powerful text editor. Some might consider Emacs one of the most powerful editors in computing history. It is highly configurable, ported to many different systems and once you get familiar with how to use it, you can be very productive. Emacs is also useful for working with many different programming languages. Emacs is built on top of a Lisp dialect called Emacs Lisp. Other Lisp dialects benefit from the the built-in Lisp syntax highlighting. That is just one example of a non-mainstream language that has support in Emacs.

Emacs is especially popular in an Unix/Linux environment. Because Emacs is GNU and opensource, a free version is available for the Windows platform as well. One issue that new users to emacs may encounter is getting the editor to work like other Windows editors. This small document is how I configure emacs to only allow one instance to run on Windows. This function is not configured by default. This is not about the best setup for Emacs or a robust emacs configuration file, merely a setup for allowing you to have only one instance of emacs running while you open multiple files.

I downloaded the emacs windows binary, version emacs-23.1 and unzipped the archive file to my local drive. I didn't use an installer. I simply unzipped the file and set the emacs bin directory in the system PATH environment variable.

There are two executables that we are most concerned about , runemacs.exe and emacsclientw.exe. The emacsclient is the socket based client application that checks for a running emacsserver instance. If one is available then open the file in a running instance of emacs. 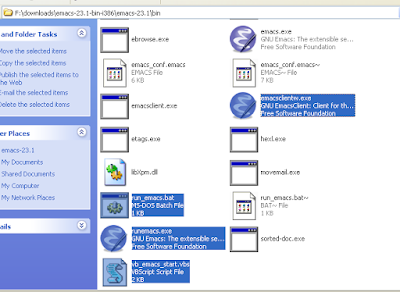 There are two other files that we are going to add to the bin directory. Add the files vb_emacs_start.vbs and run_emacs.bat to the bin directory. Note: the filename and path of these files really aren't important. I used the emacs bin directory for convience. The vb_emacs_start.vbs is the visual basic script for detecting if an instance of emacs is already running. If one is running than run emacsclientw. If one is not running then run the default runemacs.exe. 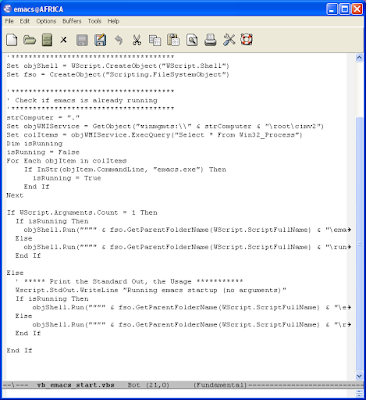 Cscript.exe is a tool that allows you to run a script file at the command line. You can run VBScript or JScript. The full script to check for emacs or launch a new instance of emacs is shown in the screenshot above.

For convience, I normally include a wrapper batch script to invoke cscript. Here is the content in run_emacs.bat:

Ask yourself, why would I get charged several months, for a one month service. There is nothing explicit on the site at all about automatic renewals. It is so unfortunate that a company has to resort to these tactics.

Here are the prices for the service.

Well, I have time off. Normally what that means is, I spend many late nights studying constantly. Some people go to the beach. I like to research.

This time I am going back to AI and Haskell. Maybe combining the two. I have a couple of themes in my AI research. I have followed the same theme since I was young. Biology, Physics and how it relates to AI. Essentially, you need to design AI from the ground up, create an environment, a virtual environment for this entity to exist and then let the intelligence flourish within that environment. Then make connections between the real environment and our environment.

Interesting AI is difficult. It is too bad that researchers mix the field with informatics and machine learning and all things that seem to belong to the more generic field of Computer Science. Genetic life is the only interesting field that seems like true AI, maybe neural network research.

So, it is my opinion, that to create the AI that we dream of. Not the CS AI you read about in research journals, we need create the AI lifeform and have it exist within a AI virtual environment. Then we interact.
Posted by Unknown at 1:29 AM 1 comment: