This document provides some working examples of the future OpenJDK 8 lambda syntax.   There was a lot of discussion whether the language changes would get included in the Java7 or Java8 so it looks like we will see the changes in Java8 slated for release in 2013.

You can see the conversion in this example:

It seems that the Java lambda implementation provides a slightly more expressive syntax for code blocks that you would normally see in an anonymous inner class.  These sections of  code are synonymous. 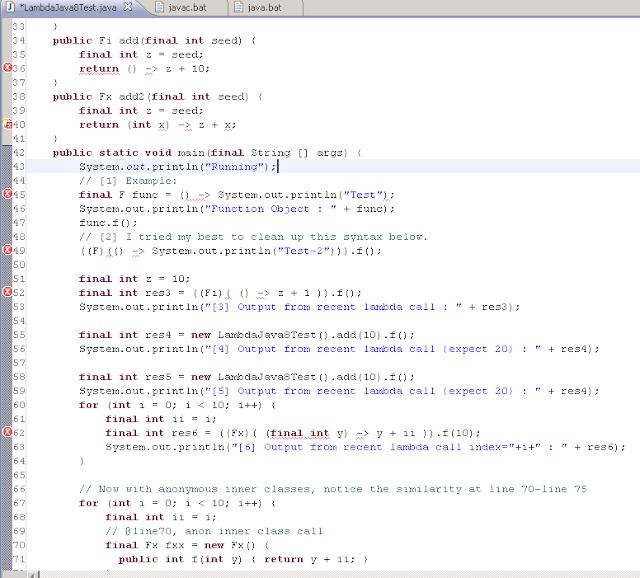 
The Lambda team provided a binary build of Javac and Java for Windows and Linux.

The Thoracic system may be compared to a great freight system, with each of its tributaries[Pg 218]—from the main trunk arteries down to the tiniest blood vessels—starting from the heart and carrying its cargo of blood to every part of the body by means of the power furnished by the lungs.

Posted by Unknown at 6:16 PM No comments:

Implementing a Parser and Simple Compiler for the Java Virtual Machine

I wanted to discuss this particular example it helps for you to understand the nature of programming languages and their implementation.  Don't be scared about the parsing input token routines in them.  They help as a tool to the developer.  This a basic implementation but at least I provided a JVM compiler.  Actually code generator from the AST to JVM byte code.


The language program in the snippet above consists of a SYMBOL name token, an assignment token, NUMBER value the PLUS token and another NUMBER token.  The result of the add operation is stored in  global memory.


The lexical analysis consists of reading the character tokens from the input stream and then converting those   ASCII characters into tokens that are used by our language.

If you look at the code snippet above, the lexer method mostly consists of a large case statement that checks for a particular character and then creates a wrapper token object for that character. Once the token object is created, we add start to add the token node to the abstract syntax tree.

3. Lexer and Simple Parser with ANTLR


The parser example code uses only the Java standard libraries.   Most developers that write domain specific languages or other programming languages may use a parser generator.  ANTLR is a parser generator system written in Java that can output parser code in Java programming language or Python.  You provide a grammar and ANTLR generates the code that you can use for the lexer and parser.  In our case, are going to create a simple grammar and then two classes are created, the lexer and parser.

When then feed the input tokens to our ANTLR code generated code.


The parser implementation converts and analyzes the tokens and coverts the tokens to an abstract syntax tree.  Once we build the AST, then we can traverse the tree and perform operations at each node.


The constant pool is a collection of constants that are referenced by ID in the data buffer or code section.


This document covers the implementation of a compiler, a very basic compiler for the JVM.  We looked at the lexer, the parser, the AST, JVM bytecode and compiler.
A. Resources
B. Source Code
https://github.com/berlinbrown/ImperativeStaticCompiledLangOneFile - Github Source, see CompiledLangOneFile.java)


For this document, I included snapshot images of the source instead of the actual source because I plan on converting this document to other formats.  I wanted to keep some of the syntax highlighting from my IDE.

Posted by Unknown at 3:31 PM No comments: