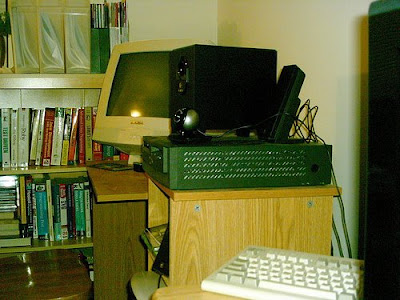 Peter Norvig created JScheme, a Lisp Scheme dialect written in Java. It was created in 1998 and it has since been forked, extended and used quite extensively in other modern projects for the web and elsewhere. The C lisp interpreter is based on the JScheme interpreter. The JScheme code is copyrighted to Peter Norvig This is only a modifications to make our Lisp even lighter
than it was originally. Norvig's most recent implementation of JScheme contains 1905 lines of Java code. This implementation contains 2000 lines of C code wrapped in additional Javadoc comments, including implementations of list, hashtable datastructures.

To Compile:
type 'make' at the command line prompt
To Run:
type 'make run' to run the tests or ./octanec

To create a new string object, we would do something like the following:

With Java, Compare and Contrast
The C implementation is an almost exact copy of the Java implementation. Of course, with the C implementation, we created the list, hashtable, and buffer libraries that are available in Java as well as some other modifications. But, the logic is essentially the same as the JScheme and mini scheme code. For example, here is the C and Java version of the lisp 'read' routine.

And the Java version...

Full Source for all three implementations, all_simple_lisp
Description of the Java Implementation

Description of the Erlang Implementation
http://jvmnotebook.googlecode.com/files/mini_jscheme.tar.gz

In the load_scheme function, there is an error with the use of 'strcmp', change to the following.

With very little effort, I changed the lisp interpreter into a concatenative/stack language interpreter. In the update, instead of parsing the lisp syntax, the parser detects the various tokens and places or pops values off the stack. With Lisp, the main data structure is the 'list', with stack languages the core data structure mainly consists of a LIFO stack.

"In Reverse Polish notation the operators follow their operands; for instance, to add three and four, one would write "3 4 +" rather than "3 + 4". If there are multiple operations, the operator is given immediately after its second operand; so the expression written "3 − 4 + 5" in conventional infix notation would be written "3 4 − 5 +" in RPN: first subtract 4 from 3, then add 5 to that. An advantage of RPN is that it obviates the need for parentheses that are required by infix"

Most of the modifications from the original Lisp interpreter code were made to the apply function. Instead of constructing a linked-list pair structure, all operations are made against the main stack:

Slava does a good job with this factor google tech talk. If you haven't already heard about it, here you go.

http://www.youtube.com/watch?v=f_0QlhYlS8g
Posted by Unknown at 1:15 PM No comments:

"Version 6 of Sun Microsystems' Java HotSpot™ VM ships with a redesigned version of the client just-in-time compiler that includes several research results of the last years. The client compiler is at the heart of the VM configuration used by default for interactive desktop applications. For such applications, low startup and pause times are more important than peak performance. This paper outlines the new architecture of the client compiler and shows how it interacts with the VM. It presents the intermediate representation that now uses static single assignment (SSA) form and the linear scan algorithm for global register allocation. Efficient support for exception handling and deoptimization fulfills the demands that are imposed by the dynamic features of the Java programming language. The evaluation shows that the new client compiler generates better code in less time. The popular SPECjvm98 benchmark suite is executed 45% faster, while the compilation speed is also up to 40% better. This indicates that a carefully selected set of global optimizations can also be integrated in just-in-time compilers that focus on compilation speed and not on peak performance. In addition, the paper presents the impact of several optimizations on execution and compilation speed. As the source code is freely available, the Java HotSpot™ VM and the client compiler are the ideal basis for experiments with new feedback-directed optimizations in a production-level Java just-in-time compiler. The paper outlines research projects that add fast algorithms for escape analysis, automatic object inlining, and array bounds check elimination."
Posted by Unknown at 12:00 PM No comments:

(Draft)
I was having a discussion online. C is better than Java. Java is better than C. You know, the conversation you have everyday on the web and come up with the same conclusions. When people mention the benefits of Java, they normally mention WORA (write once, run anywhere) and Java's garbage collection. The Java developer does not have to worry about his application crashing and what-not. And it just occurred to me. I see more crashes with Java servers and systems than I could ever imagine with systems that were built with C++ or C. I don't think I have worked at a Java shop where they don't periodically reboot their Java application servers. Does this happen with Apache/PHP driven applications? Shrug?. I don't want to get into that debate, but it is the reality in the J2EE/Java world that the Java virtual machine is not immune to crashes or the dreaded 'Out of Memory' Errors. But like everything in life, there are no guarantees, right?. The Java developer is supposed to know what he or she is doing? I am posting this entry to find out a little bit more on why this happens and what is going on with the garbage collection at the time, also a couple of tools to help monitor the JVM.

"Java uses an automatic garbage collector to manage memory in the object lifecycle. The programmer determines when objects are created, and the Java runtime is responsible for recovering the memory once objects are no longer in use."

Here is an example C program with a very obvious error.

Here is the output:
Segmentation fault

Obviously, this is a simple application. Imagine that you are writing a C based web application server. In the millions of millions of lines of code, you didn't properly handle HTTPS requests for clients in France (I am using this as a horrible example) and you have an error just like this one. What happens? The server crashes and you have to call somebody in the middle of the night to reboot it. Does something similar happen in the J2EE world? It actually may happen more often than you might think.

Here is an example of poor Java programming. I am using the String concatenation operator, which will create N many new strings.


This is one method, a setter method in my simple bean class. Let's say that
If we ignore that Java does caching, String interning of our String data, we might end up with a String that is 200k chars in size. And creating all of those new objects gets expensive very quickly.

Here is code that I used to crash the JVM due to out of memory errors:

I reduced the amount of load that the JVM was under, so I could get a snapshot of the heap usage. Here is a chart on what happens during the various garbage collections.

The output is generated with the 'verbosegc' and other JVM options:
(Note: The duplicated 'verbosegc' options gives more information about the garbage collecting)

There are 1800 data points in the output file and in the image. Each GC line in the gc_anal analysis file contains GC information about a minor garbage collection. 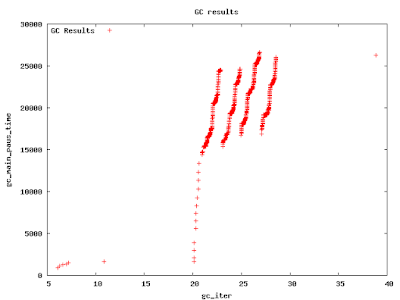 For this simple example, the chart is not that interesting. During the first 20 seconds, there is a Thread.sleep(2000) call. After that, we allocate many new objects, especially string objects and wait for the JVM to stop working. It is interesting that we are getting close to the maximum heap size of 32MB just based on this simple application.

The first 'String/Object' test was not that complex. I wrote the most basic simple HTTP server and tested the JVM with large objects as well as modified how often the client would connect to the server.

The code above represents the 'run' method in the server thread. Once a client connects to the server, the server returns with a valid HTTP response. The HTML output is like a tabulated report you might find with a Struts or Spring JSP application. For each row in the report, the following bean is instantiated. Essentially, it is your run on the mill Java POJO bean. 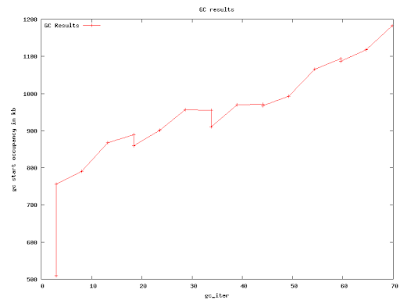 The garbage collection chart above is output based on light load. I used 'curl' to generate a request every 2 of seconds. There are 10 rows in the report. 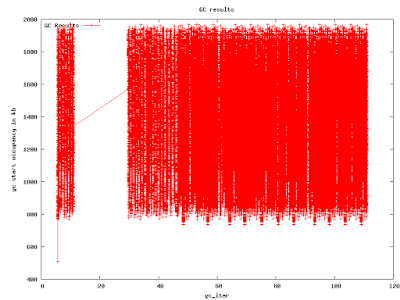 The chart above depicts output under heavy load. I removed the delay between requests. There are 500 requests and I increased the number of rows in the report to 100. It is not reaching the maximum heap memory at all, but it is minor garbage collection much more rapidly. 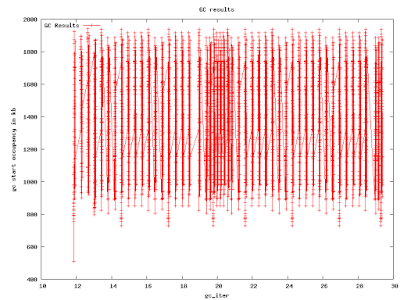 Sun just recently add a useful application to the 1.6 toolset, the heap analysis tool or 'hat'. If you generate the heap profile binary output, you can run this tool on the output file to give you better insight into to what is happening to the heap. What are objects are being created? There is a histogram of the total number of allocated objects and the total size. There is also a sophisticated javascript query language for finding trouble objects. The hat tool reads the input file and then launches a HTTP server application. I used the following script to analyze my GC output. 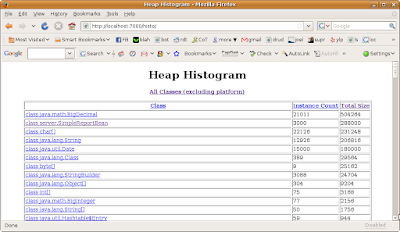 In the figure above, we are looking at the heap histogram in the browser on port 7000. 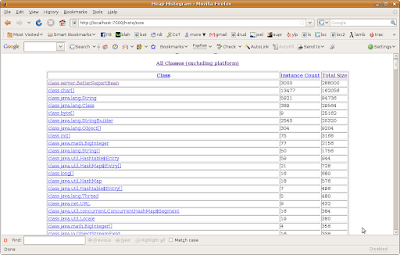 Here is one variation of the Java code used to test against:

With the better report bean, we used constant strings and referenced them in our class fields. We did this and made a reference to these constants as opposed to creating new String, Date or BigDecimal objects. Essentially, we avoided creating a bunch of new objects that we didn't need to. Notice the interesting statistics a little further down.

Here is the the full source for the typical bean object and a better one with more use of constants.
Simple Report Bean (basic POJO)
Better Report Bean

JConsole is provided with the 1.5+ JDK. The screenshot depicts one of the jconsole views. You simply need to type jconsole at the OS command-line prompt and you are given the option to connect to a particular running Java application process id. I can see where this tool is useful for debugging local or dev J2EE servers. The Diagnostic Tool for Java Garbage Collector is a tool provided by IBM for monitoring the Websphere server. Websphere will output a custom GC statistic output, typically to a file called native_stderr.log . The diagnostic tool can be used to analyze the file and generate the following application. And even though it is amazingly verbose, you might be able to interpret the raw output. Here is example XML output. 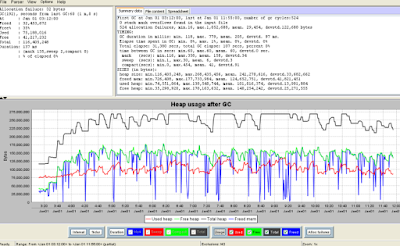 I always feel that charts and graph are great visuals for displaying simple or complex concepts. I only know the surface level details of gnuplot, but here are some notes on creating the images above. I used a simple python script to analyze the GC statements generated by the JVM verbosegc output and then created a tabulated data file that can used with gnuplot. 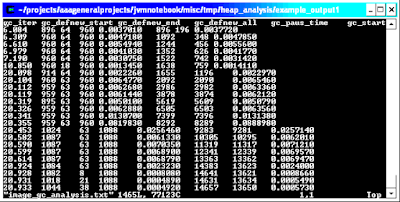 I normally create a shell script to set all the gnuplot commands and launch the application:
On Regex
In the gc_parse.py python application, I used a couple of lines of regex to find the GC patterns generated by the verbose gc JVM output.
------
Posted by Unknown at 10:18 PM No comments:

I have had it. I am done with the current set of programming languages and writing my own. Maybe it is an effort in futility but I am frustrated enough to give it a go. There is always something missing from the language I am using.

I don't have the full details yet, but here are some must haves:

1. Must be scripting and compilable/bundled language.
2. Must have a separate virtual machine runtime with garbage collector.
3. Must have a command console
4. Must be well documented, have document code generator