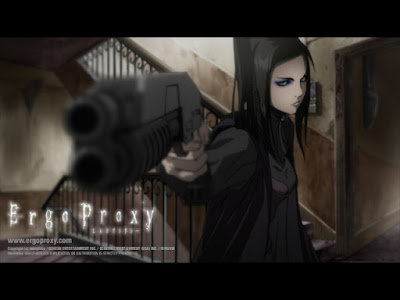 What is Anime? Google it. Anime is Japanese animation. Animation that is not necessarily targeted for kids. In fact, some Animation can be pretty rough and make a 40 year old squirm. Basically, Anime has characters and culture, stories, plots. If you like interesting stories, then you will like most of the popular Anime.

What is the difference between Manga and Anime? I am American and usually just refer to anything that moves and is from Japan as "Anime" or Japanimation. But that isn't entirely accurate. There are some Anime TV series/movies that were Manga comic books in Japan and then made into movies. Manga to Anime. Manga is Comic Book in Japanese. If someone says, "Fullmetal Alchemist is a great Manga". I guess they could refer to the comic book version of Fullmetal or the TV adaptation. But normally they are referring to the comic book. Anime can be an animated series derived from a Manga.

There are many genres of Anime. I like the adult themed stuff. Horror, Cyberpunk, Sci/Fi etc. With the adult themed Anime, you get similar story lines, violence and action that you would get from a Hollywood blockbuster. The difference is that the Anime is animated. When you think Cyberpunk, think Blade Runner. Cyberpunk focuses on technology, cybernetics, robotics but culture is at a lowpoint. Popular cyberpunk Anime focuses on wealth by big corporations but poverty is rampant among the lower classes. You see this with series like Ghost in the Shell, Akira and Ergo Proxy. Why cyberpunk? It is for those that like technology, sci-fi and a bit of nihilism.

What is some popular Anime?

Ergo Proxy (theme Cyberpunk, 10/10) - Ergo Proxy is popular but not as familiar as Ghost in the Shell. It is Cyberpunk with a mix of fantasy, horror and sci/fi. It is a long series and has a solid, dark theme. Ghost in the Shell is a detective cyberpunk series. Ergo Proxy is more fantasy and dystopia. Most of the series involves the main character running from the oppressive society.

Monster (theme Detective, rating 8/10) - Monster is pretty basic detective/conspiracy story. A doctor is falsely accused of murder and other crimes. He goes on the lamb and tries to find the sadistic conspirator. I gave Monster a score of 8 because the stories are pretty basic and plain. But it still is an enjoyable series.

The Last Exile (theme Steampunk/Military/Flight?, rating 9/10) - What is steampunk. Somehow in Japanese Anime world, steam and diesel? can be used to fly planes and control machines. Generally these steam punk series target a fictional time period around the early 1900s. Ironically, you have steam powered robots and other machines that seem quite advanced. Anyway, The Last Exile is a steam punk/flight series that focuses on two friends that are caught up in a war. A lot of the series focuses on their relationship and how the war tears them apart. It is solid Anime. Good story, animation. At times, there is too much a focus on the drama of their lives as opposed to the war going on.

I rated this film a little lower than the movie review sites and user ratings on
IMDB. The film suffers from two problems. First problem: It is a basic, very obvious thriller movie. In the beginning of the movie, when a character tells you, "One of these persons in the picture killed her". And the movie leads towards one of the people actually killing that person. Who cares, you already know what is going to happen. And there are only two or three suspects. So, the thriller aspect of the movie isn't that interesting. It is unfortunate that they spent all of this energy to build up the suspense of the potential killer, when we already know it is either that guy, that guy or that guy. And to be honest, the older killers aren't even that interesting anyway. I don't care if any of them were the killers. They were Nazi's and/or Nazi sympathizers. So, the thriller elements in the movie weren't that interesting to me.

Second point: Outward displays of graphic misogyny. I don't know if the writer hated women or was a passionate fighter for the female cause. Either way, women are treated like crap in this movie. There are a couple of graphic rape scenes. So graphic, it took me a hour into the movie to even get the rape scenes out of my head. There is female and male rape. If you wanted to describe the overall theme of the movie. The theme is misogyny. The killer (shocker) kills women and the main female character was apparently raped in her past and hates women. And is continually treated like crap by other men.

So there are two issues; obvious ending and misogyny. Despite those issues, the movie could be one of the best pictures of the year. It has great direction and style. I really liked the main male character and the actresses. And wow on the actress. I hope Noomi Rapace gets every international movie award you can give out. Yea, she was the girl that was raped. She will probably get an Oscar or some award. Everything is great up to a point. I wish there was more conspiracy involved. The main character sleuths work hard at their case. But, I didn't really care about the case. And who knows, maybe the book did a better job at making us away of severity of their crimes. The movie didn't do that. You get the impression that something is going on and it is bad, but you don't feel the sense that it is a major conspiracy.

"Oh, he is a crazy, serial killer. Oh, OK. Well just arrest him and be done with. And you might save some time and just arrest all of them and search their houses. Problem solved".

In Summary: Great direction, great setting and mood. Great acting. Great build up. And overall a good movie. But there was a little bit too much man on woman violence for me and I bet the plot from the book was dumbed down too much for the movie. Either way, it probably will beat out most Hollywood movies this year.
Posted by Unknown at 11:42 PM No comments: